The Samsung Galaxy S9 has a super camera and combined with the processing power of the built-in processor, super slow motion videos are possible. These are simply said slow motion videos, which play processes extremely slowly.

To do this, the camera records a scene at up to 960 frames per second. However, only resolutions of up to 1280 x 720 pixels are possible with the Super-Slow motion function.

How a super slow motion recording can be made with the Samsung Galaxy S9 or the Galaxy S9+ is explained as follows: 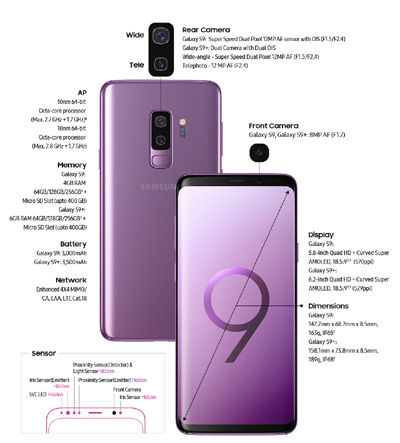 2. Selects the corresponding mode in the live screen: "SUPER SLOW-MO"

3. A small square appears on the display, where you should now play the scene you want to record in Super Slow Mo

4. Use the "Record" button to record a video to

5. Your Samsung Galaxy S9 will now automatically decide which part of the scene is recorded with Super Slow Mo.

It is important to know that 20 slow-motion moments can be recorded within a video. Such a slow-motion moment takes a maximum of 0.2 seconds, which is not much. The video is then saved and you can check what was recorded in Super Slow Motion.

These can then be cut from the video or converted into a GIF, for example. GIF´s can contain a maximum of 6 seconds of video material. If you do not want to rely on the automatic mode, you can also switch to the manual mode. Here you have to choose the moment yourself by tapping on the special Super Slow Motion button.

But it is usually more difficult to hit the right moment here than the automatic mode already does. You now know how to record a Super Slow Motion video on the Samsung Galaxy S9 or Galaxy S9+.